This is what I was doing on Saturday morning: the Color Run at the Alliant Energy Center in Madison. The run is not timed, so half the participants were walking instead of running. I alternated doing both, because I am woefully out of shape. It was a lot of fun. You get colored powder thrown at your white T-shirt along the course, giving rise to a tie-dye effect. Sadly, all of the colorful powder washed out of the shirt when I washed it. However, I got a UNICORN medal for finishing. Which was all I really wanted, anyway. 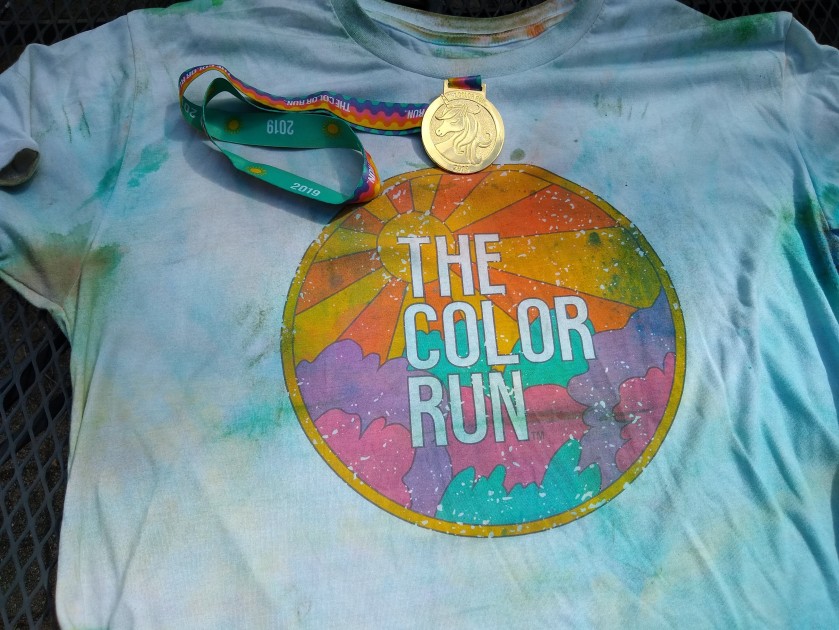 I have a ¾ sleeve T-shirt with “World’s Okay-est Runner” emblazoned across the chest. I’ve had it for almost 2 years now and it remains one of my favorite shirts. Quite frequently, I wear it when I work out at the YMCA, or when I go running on the Glacial Drumlin Trail. More recently, I wore it this morning when I ran a 5k race in Monona, WI. When I saw this shirt on clearance in the sportswear section at Walmart, I laughed, and knew that I had to buy it, because this T-shirt seemed to have been made with me in mind.

As the numbers go, I am below average. In any given racing event such as this, I will probably never place in the top ten, even in my sex and age group. Now, I don’t say this to be self-deprecating, to garner sympathy or beg for validation. I am satisfied with my experience.

First off, it was a splendid, beautiful day to go out and get some exercise (along with a whole bunch of other people.) I kept up a running cadence the entire way despite several hills along the route and people trying to drive their cars along the course.

Additionally, I finished this 5K in better time than I thought I would. I even saved up enough “oomph” to sprint the last 100 yards and across the finish line. Why? Because – even though it made me wonder for a second if I was going to faint – it was pretty awesome to pass a few people who had passed me earlier on the course. And my performance was better than I anticipated going into the chute. All of these things were pretty cool. However, the only goal that I actually set for myself was that I finish that 5K.

Did you notice how many times I used some form of the word “finish” so far? Ten times! All right, that last one didn’t count…it was only nine times. Naturally, repetition of this word is purposeful, because I was trying to make a point. I’m sure you got it right away, mainly because you are smart, but also because as a writer I have all the subtlety of a machine gun in a china shop. Or, maybe that was supposed to be Pee-Wee Herman in a movie theater? Moving on to the point…

Despite my comparative slowness as a runner, despite the hills and despite dodging vehicular traffic – I finished the race.

Running a race is probably one of the most trite and overused metaphors for life in the history of humankind, but I feel that it is legitimately applicable. Paul used running as a metaphor for the Christian life in his epistles to the Corinthians and Galatians, and so did the writer to the Hebrews. The prize of finishing this race, of course, is attaining heaven. Sadly, so many people give up part way and drop out of the race of Christian living because the way seems too long, too hilly, or there is too much traffic interfering and frustrating their path. Or folks simply get lost because they wander away from the course God set for them. Even worse, many people choose not to run – or even walk – that course at all.

Fortunately, So long as there’s life, there’s hope. God is patient with us and offers us plenty of opportunities to get into the race or back on the course. He doesn’t care so much about when we start, how fast we run, or how many times we stumble off the route and back on again. What matters most to God is that we finish, in faith, with Him.

On a more humorous note, I feel that running a race can also be used as a metaphor for writing a novel. Some authors are highly prolific, publishing a book – or several – every year like clockwork. These are your 6 minute mile runners. They are fast! Productive! Best-selling authors! And sometimes their books are even pretty good to read.

And then, on the other end of the spectrum, there’s me. I haven’t finished my race yet, but I’m still plugging away. “Steady, as she goes,” sing the Raconteurs as I type.

How goes your race, O Reader of my blog?